Do You Know Your Spiritual Enemies?

Knowing your enemy is so important no matter what realm - even medicine. Up until Louis Pasteur proved the effects of micro-organisms, the prominent theory for disease was it resulted from an imbalance of the four basic "humors" or fluids present in every human. This theory was established by the famous ancient Greek physician, Hippocrates, who taught that the cure to the sickness was to remove or add the humor in question to balance the body. This belief led to all sorts of perplexing treatments like using leeches to suck your blood, creating boils on your skin to draw out fluids, dehydrating and other gross stuff.

It may sound intriguing and relatively innocent, as long as you didn’t get sick. It is very likely that George Washington died as a result of this type of medicine. He woke up in the middle of the night with a bad sore throat that was so inflamed it was hard to breath. They determined that he had too much blood so they bled out 40% of his blood. They also did a bunch of other things to reduce his bodily fluids and in the end, he most likely died not from the sore throat but from its treatment.

When it comes to disease, it is really important to know our enemy isn’t imbalanced humors but microorganisms. You have to know your enemy.

Ephesians 6:10-20 is a classic passage on spiritual warfare. Perhaps too often it is taken out of context. This is a closing paragraph to a letter that is jam-packed with amazing truths about the good news of Christ and the sort of life that flows from it. The first three chapters are pretty much all about the amazing blessings that come to us with the gospel. Blessing upon blessing is listed in this rich section of scripture. The last three chapters are more or less about the lifestyle, the church and relationships and type of people that are produced as a result of all the previous gospel blessings. Then, Ephesians 6:10-20 tells us, in conclusion, that living in these gospel blessings with gospel-driven faith and obedience is how we best our spiritual enemies.

Finally, be strong in the Lord and in the strength of his might. Put on the whole armor of God, that you may be able to stand against the schemes of the devil. For we do not wrestle against flesh and blood, but against the rulers, against the authorities, against the cosmic powers over this present darkness, against the spiritual forces of evil in the heavenly places. Therefore take up the whole armor of God, that you may be able to withstand in the evil day, and having done all, to stand firm. Stand therefore, having fastened on the belt of truth, and having put on the breastplate of righteousness, and, as shoes for your feet, having put on the readiness given by the gospel of peace. In all circumstances take up the shield of faith, with which you can extinguish all the flaming darts of the evil one; and take the helmet of salvation, and the sword of the Spirit, which is the word of God, praying at all times in the Spirit, with all prayer and supplication. To that end keep alert with all perseverance, making supplication for all the saints, and also for me, that words may be given to me in opening my mouth boldly to proclaim the mystery of the gospel, for which I am an ambassador in chains, that I may declare it boldly, as I ought to speak. Ephesians 6:10-20 (ESV)

The Devil is A Chief Enemy

But often, as we go about our Christian lives, we focus more on the enemies of our sinful nature and the world instead of the devil. But Ephesians 6 and the rest of the bible clearly and unashamedly assert that although these two enemies are significant, we must also know that the devil and his minions are a chief enemy. Actually, if we only read Ephesians 6:10-20 we might think that our enemies are not in fact humans at all but the devil and his array of allies. This passage is a wake up call to recognize that the devil is a chief enemy of believers, a point too often underestimated. Do you know your enemy?

Also, Ephesians 6:12 and other scriptures teach us that the devil is not alone, he has a vast array of fellow evil spirits, perhaps as many as billions, who exert influence over the world according to different ranks and functions. They are called rulers and authorities accordingly. We face a formidable, pervasive hell-bent foe. This foe exerts significant influence in the world - to the piont of earning the titles, "rulers" and "authorities". The devil has lots of help. The devil isn't alone.

The Devil Has Allies

Not only does the devil have his fellow evil spirits but he also has two powerful allies to his cause. If we expand our gauge beyond Ephesians 6:10-20 to Ephesians 2:1-3, we see that the devil (here called the prince or ruler of the power of the air) and his minions have two powerful allies in the world and our sinful nature (here called "the flesh").


And you were dead in the trespasses and sins in which you once walked, following the course of this world, following the prince of the power of the air, the spirit that is now at work in the sons of disobedience— among whom we all once lived in the passions of our flesh, carrying out the desires of the body and the mind, and were by nature children of wrath, like the rest of mankind. — Ephesians 2:1-3 (ESV)

There are various scriptures that also teach us this: Ephesians 2:1-3, James 4:1-7, Acts 5:1-5, Ephesians 4:26-27, 1 John 2:15-16. The devil has allies.This evil triad can wreak havoc left to themselves. Often we fail to recognize that usually all three are at work together in alliance. You need to recognize this evil triad that is at work to undermine your faith and life in Christ. Do you know your enemy? 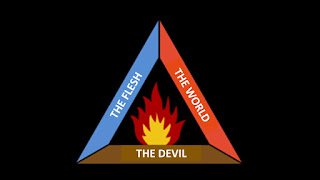 The Devil is A Defeated Foe

And you, who were dead in your trespasses and the uncircumcision of your flesh, God made alive together with him, having forgiven us all our trespasses, by canceling the record of debt that stood against us with its legal demands. This he set aside, nailing it to the cross. He disarmed the rulers and authorities and put them to open shame, by triumphing over them in him. — Colossians 2:13-15 (ESV)

And he said to them, "I saw Satan fall like lightning from heaven. Behold, I have given you authority to tread on serpents and scorpions, and over all the power of the enemy, and nothing shall hurt you. Nevertheless, do not rejoice in this, that the spirits are subject to you, but rejoice that your names are written in heaven." — Luke 10:18-20 (ESV)

Best of all, the devil is a defeated foe.  Christ's work on the gross deals with the enemy of our sin by paying its penalty, breaking its power and very soon, when we see Christ face to face, removing its presence. That is very good news. Secondly, his work on the cross is God's victory over the devil and his minions. No longer do they have a right to terrorize God's people, no longer do they have a right to rule over humanity. Christ has defeated their reign by undermining the grip of sin and he will eventually eradicate their influence on the world entirely. In the meantime, his children walk in the authority he possesses to tread on scorpions and be a part of God's mission to win back people from all the nations and neighborhoods of the earth. The devil is defeated by Christ and Christ's victory is our victory. So, although it is good to know your enemy, it is even better to know he is defeated.

You can listen to more about by listening to the following messages from our church.
.

Posted by pfbuckley@gmail.com at 2:23 PM

I try to be reading concurrently in 7 areas - one chapter a day for each day of the week. 1)Sunday - Biography 2)Monday - Fun (fiction or other of choice.) 3)Tuesday - Worship/Theology, 4)Wednesday - Church Witness, 5)Thursday - Church Walk, 6)Friday - Language, 7)Saturday - Pastoral/Leadership. Here are my books for now. Let me know what you are reading!

A Praying Life: Connecting with God in a Distracting World
by Paul E. Miller
tagged: currently-reading

The Conviction to Lead: 25 Principles for Leadership That Matters
by R. Albert Mohler Jr.
tagged: currently-reading

The Meaning of Marriage: Facing the Complexities of Commitment with the Wisdom of God
by Timothy Keller
tagged: currently-reading

Orange and Green A Tale of the Boyne and Limerick
by G.A. Henty
tagged: currently-reading

An attempt to understand, live and discuss Theology, Family, Church, Culture, Spirituality, Philosophy and Fun, all with the good news of Jesus Christ at the center. Come join us!