Justin Taylor had a great post on John Updike yesterday: 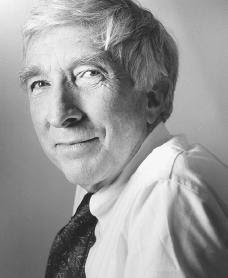 Acclaimed American writer John Updike died this morning at the age of 76.

I do not know his spiritual state (he was born Lutheran and later became Episcopalian), but I rejoice in the truth that he saw. For example, here is his “Seven Stanzas at Easter”:

Make no mistake: if He rose at all
it was as His body;
if the cells’ dissolution did not reverse, the molecules
reknit, the amino acids rekindle,
the Church will fall.

It was not as the flowers,
each soft Spring recurrent;
it was not as His Spirit in the mouths and fuddled
eyes of the eleven apostles;
it was as His Flesh: ours.

The same hinged thumbs and toes,
the same valved heart
that—pierced—died, withered, paused, and then
regathered out of enduring Might
new strength to enclose.

Let us not mock God with metaphor,
analogy, sidestepping transcendence;
making of the event a parable, a sign painted in the
faded credulity of earlier ages:
let us walk through the door.

The stone is rolled back, not papier-mache,
not a stone in a story,
but the vast rock of materiality that in the slow
grinding of time will eclipse for each of us
the wide light of day.

And if we will have an angel at the tomb,
make it a real angel,
weighty with Max Planck’s quanta, vivid with hair,
opaque in the dawn light, robed in real linen
spun on a definite loom.

Let us not seek to make it less monstrous,
for our own convenience, our own sense of beauty,
lest, awakened in one unthinkable hour, we are
embarrassed by the miracle,
and crushed by remonstrance.

Posted by pfbuckley@gmail.com at 6:51 AM

I try to be reading concurrently in 7 areas - one chapter a day for each day of the week. 1)Sunday - Biography 2)Monday - Fun (fiction or other of choice.) 3)Tuesday - Worship/Theology, 4)Wednesday - Church Witness, 5)Thursday - Church Walk, 6)Friday - Language, 7)Saturday - Pastoral/Leadership. Here are my books for now. Let me know what you are reading!

A Praying Life: Connecting with God in a Distracting World
by Paul E. Miller
tagged: currently-reading

The Conviction to Lead: 25 Principles for Leadership That Matters
by R. Albert Mohler Jr.
tagged: currently-reading

The Meaning of Marriage: Facing the Complexities of Commitment with the Wisdom of God
by Timothy Keller
tagged: currently-reading

Orange and Green A Tale of the Boyne and Limerick
by G.A. Henty
tagged: currently-reading

An attempt to understand, live and discuss Theology, Family, Church, Culture, Spirituality, Philosophy and Fun, all with the good news of Jesus Christ at the center. Come join us!